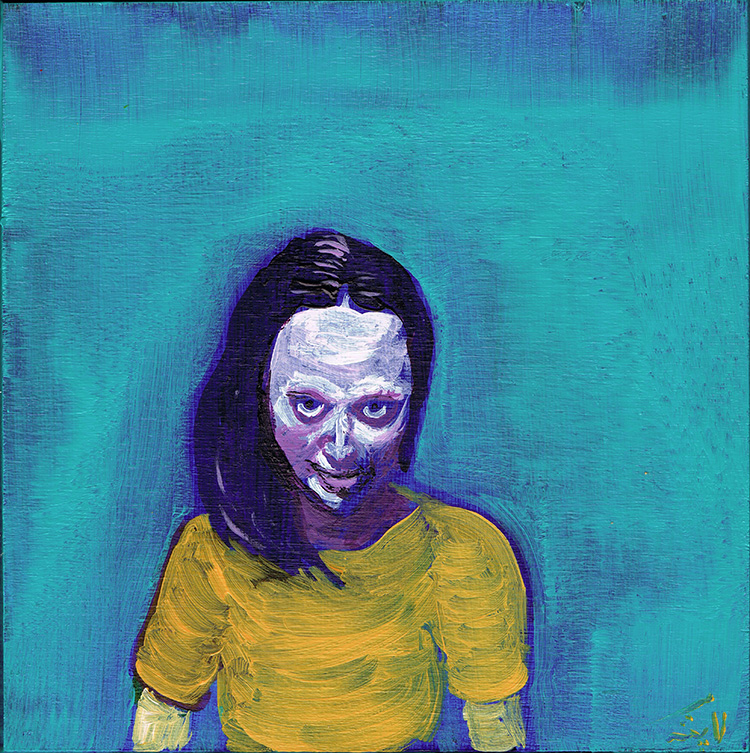 Plus seven other works in the series…

Daisy Rockwell grew up in a family of artists in Stockbridge, Massachusetts. A granddaughter of Norman Rockwell, she is a scholar of South Asian literature who is fluent in Urdu. She grew up painting and continued to make art through her college years, but stopped when she went to graduate school. When she returned to New England after working in academia at the University of California, Berkley, she began painting again, developing series like Arrested to spur public dialogue and give voice to the incarcerated—particularly women—who strive to be heard.

“This set of paintings is a continuation of my work on ancient Indian rasa theory, a study that began with an exploration of the notion of terrorism and the war on terror, a battle ostensibly being waged against the emotion of fear,” the artist said. “As part of the war against terrorism, Americans are urged to feel frightened and suspicious of others, rather than free of fear, as in Roosevelt’s, and Rockwell’s, formulation.” Rasa means essence, and Sanskrit aestheticians delineated eight or nine of these essential moods, which are found in the arts. In these works, it is up to the viewer to decide what mood each woman is experiencing.

“I’ve done paintings of politicians and dictators, and there are thou-sands of pictures of these people on the Internet,” said the artist. “But for these women, there was hardly anything. Their lives were only scantily doc-umented.” Drawn from photographic police records, her subjects confront the viewer directly in works that resemble Mughal miniatures, the tiny, gem-like illustrations produced in South Asia from 16th to the 19th cen-turies. Rockwell is the author of The Little Book of Terror and Taste. Her translation of Upendranath Ashk’s novel, Girti Divarein, was published as Falling Walls, and she has also translated the works of Hindi writer Bhisham Sahni, among others.