TCM is pleased to present an evening hosted by Harvey J. Kaye, author of The Fight for the Four Freedoms: What Made FDR and the Greatest Generation Truly Great, published by Simon & Schuster in 2014. Kaye will present five films that illustrate the inspiration of his book: the “Four Freedoms” named as America’s goals by President Franklin D. Roosevelt in his 1941 State of the Union address. These include freedom of speech and worship, and freedom from want and fear.

This night also coincides with a restored 75th anniversary edition of Norman Rockwell’s series of paintings, “The Four Freedoms,” which will be on display May 25 to September 2 at the New-York Historical Society before touring as an international traveling exhibition through 2020. 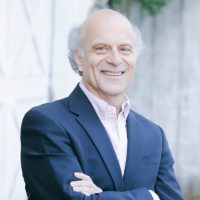 Kaye, the Director of the Center for History and Social Change at the University of Wisconsin-Green Bay, has published 10 books on history and politics; contributed articles to such publications as The Washington Post, The Daily Beast, Salon and Huffington Post; and has appeared on numerous TV and radio programs including Bill Moyers Journal and Here and Now. Below are the films he will present as part of our “Four Freedoms” evening, along with the freedoms they represent.

(Freedom from Want / Freedom from Fear) — The Grapes of Wrath (1940), John Ford’s classic film drama, adapted from the John Steinbeck novel, is set during the Great Depression and focuses on an impoverished family of tenant farmers who are forced to leave their Oklahoma home and seek a better life in California. Although they hope for a better future, they fear for their very survival. 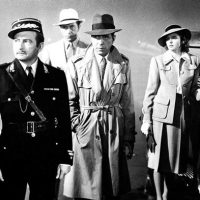 (Freedom of Worship / Freedom of Speech) — Casablanca (1942), The great romantic classic of the World War II era casts Humphrey Bogart and Ingrid Bergman as star-crossed lovers in the Moroccan city then filled with refugees desperate to embark for America. It was a time and place where being of the wrong nationality or the wrong political beliefs could spell disaster for the dispossessed. (Kaye has noted that freedom of worship isn’t limited to religious beliefs but includes the freedom to be who one genuinely is.)

(Freedom of Worship / Freedom from Fear) — The Cummington Story (1945), This docudrama short, part of a series called “The American Scene” produced by the U.S. Information Service Motion Picture Bureau, focuses on a small town in Massachusetts and how its citizens react to World War II refugees. Local institutions including a church, town hall and grocery store play important roles in leading the townspeople to change their attitude from resentment to acceptance. 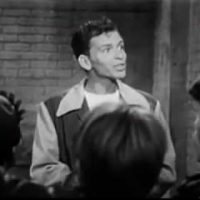 (Freedom of Worship / Freedom from Fear) — The House I Live In (1945), This short, starring Frank Sinatra as himself, was made by RKO to oppose anti-Semitism as World War II came to a close. The storyline has Sinatra defending a Jewish boy from a group of bullies and explaining to them that all religions should be respected equally. Sinatra also sings the title song, which became a hit for him.

(Freedom of Speech) — Deadline – U.S.A. (1952), This film noir stars Humphrey Bogart as a crusading newspaper editor who dares to expose the crimes of a racketeer despite threats of violence. Richard Brooks directs a cast that includes Ethel Barrymore as the widow of the paper’s founder. Bob Greene, syndicated columnist for The Chicago Tribune, called this film “the greatest journalism movie ever made — that ever will be made.”