In early 1941, with the U.S. almost a year away from entering World War II, President Franklin Roosevelt used his annual message to Congress to set out what he called the “Four Freedoms”—freedom of speech and worship, freedom from want and fear. Two years later, at the height of the war, the Saturday Evening Post used four consecutive issues to publish images inspired by FDR’s speech, all done by America’s best-known illustrator, Norman Rockwell.

The formally executed oil-on-canvas originals now form the center of an exhibition at the New-York Historical Society Museum & Library. The show recalls Rockwell in his creative prime and includes about 150 additional artworks and objects, including some 30 Rockwell oils, like his 1943 “Rosie the Riveter.” 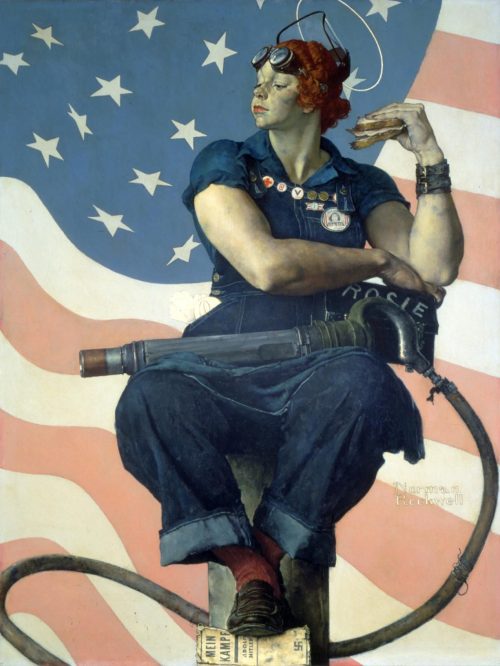 “Rockwell, Roosevelt & the Four Freedoms” runs from May 25 through Sept. 2. An expanded version will then tour for two years to venues such as the Museum of Fine Arts in Houston and France’s Caen Memorial Museum, near the scene of World War II’s Normandy beach invasions. In fall 2020, the exhibition will wind down at the Norman Rockwell Museum in Stockbridge, Mass., the largest collection of Rockwell works and the permanent home of the artist’s Four Freedoms series.

Rockwell’s decades of work on hundreds of commissions from the Saturday Evening Post made him a celebrity—though serious art lovers often regarded him as a mere illustrator. But over the past few years, those paintings, typically featuring intergenerational scenes of small-town life, have seen a sweeping reassessment by the art market, with directors George Lucas and Steven Spielberg among collectors. At a 2013 auction at Sotheby’s New York, Mr. Lucas paid $46 million for Rockwell’s 1951 “Saying Grace,” setting a record for the artist at auction. The work will join other works from the director’s collection at the Lucas Museum of Narrative Art, set to open in Los Angeles in 2022.