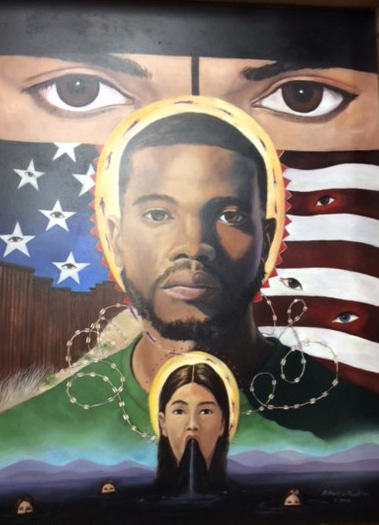 Who Are We The People?

Robyn Phillips-Pendleton  Who Are We The People?, 2018 Oil and Casein on Claybord

Robyn Phillips-Pendleton examines questions of American identity and inclusiveness for people of different races, cultures, and religions who seek the ideals of freedom reflected in Roosevelt’s words and Rockwell’s imagery. Associate Professor of Visual Communications at University of Delaware, Newark, Phillips-Pendleton has worked as a graphic designer and illustrator, creating imagery for institutions, magazines, and books. A United States Air Force Artist, she has been commissioned to create paintings featuring the activities of the armed forces, including their work in Haiti following a catastrophic earthquake.